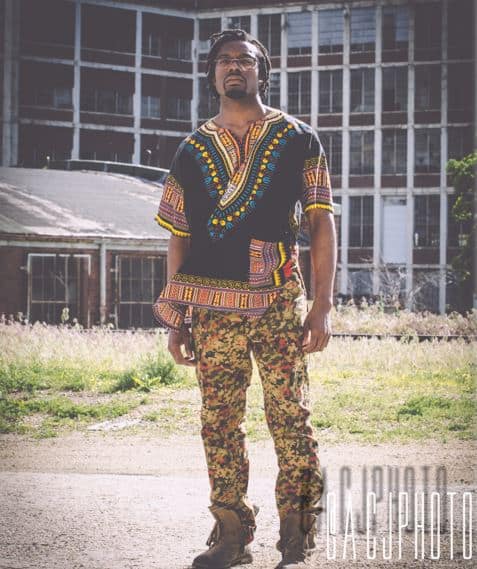 I was in Chicago and it was raining. Me and my brother (T-MAC) were walking and looking for a cab. When we found one it was an UBER cab, and the cab driver asked us what our names where. Then he refused to escort us because he was looking for someone named Roger. My brother and I found another cab, and when he asked what my name was I told him, “Roger,” he said, “Get in.” 5 minutes into the ride, the cab driver disclosed to us that he was born and raised in Timbuktu and he proceeded to educate us on what my name meant in his native tongue. He said, “Where I am from your name, RAJU, means a KING WITH NO KINGDOM.” Even though I said Roger, RAJU, spoke to my experience as an African born in America; and the rest is history.

My birth name is Alan Joshua Patterson, but most people call me Josh. My title at my W-2 job is Business Attraction Coordinator, I work for an economic development organization. I grew up in Zion, IL, a town of 25K, 45 minutes north of Chicago. I went to college at Luther College in Decorah, Iowa. Then moved to Rockford, IL; where I currently reside and grind. I love Rockford, and if you ever come this way you have to let me know, I guarantee you will have the best pizza you have ever tasted.

I wrote my first poem as a senior in high school for a project in my senior government class. Every since then writing has been therapeutic. I played football in college (Cornerback) and did not make much time for writing. My first job out of college was with a tobacco company, and I worked there for three years. In 2014 I quite without a job and decided to pursue my passion and purpose in life, to CHANGE THE WORLD. I realized that time is the most prized possession because you don’t know how much of it you have, so whatever you do with your time you are dedicating your life to it. For three months all I did was personal train and write. When I would write I could feel when a piece was a poem and when it was a song.

I write about everything, but mostly social justice and love.

I like to cook, and my play any instrument I can get my hands on.

I model and act as well.

I love to learn.

I admit my flaws because it allows me to see the greatness in others.

Thank you for sharing my journey with me. I pray that we continue to be constructive and productive assets to one another.

1 thought on “How I got the name Raju”